admin
Just ahead of the Tesla Battery Day Tesla's Chinese battery partner CATL announced that its one-million-mile electric car battery is ready for production. This battery has amazing specs and Tesla is going to greatly benefit from it.

According to Bloomberg, the Chinese electric car battery giant that makes batteries for Tesla and Volkswagen developed a power pack that lasts more than a million miles -- an industry landmark and a potential boon for automakers trying to sway drivers to their EV models and is ready to sell pack that lasts 16 years.

"Contemporary Amperex Technology Co. Ltd. is ready to produce a battery that lasts 16 years and 2 million kilometers (1.24 million miles), Chairman Zeng Yuqun said in an interview at company headquarters in Ningde, southeastern China. Warranties on batteries currently used in electric cars cover about 150,000 miles or eight years, according to BloombergNEF.

"Extending that lifespan is viewed as a key advance because the pack could be reused in a second vehicle. That would lower the expense of owning an electric vehicle, a positive for an industry that’s seeking to recover sales momentum lost to the coronavirus outbreak and the slumping oil prices that made gas guzzlers more competitive.," Bloomberg reports.

Created only eight years ago by the discreet Zeng Yuqun, CATL has focused on the electric vehicle market from the start. A strategy that is in line with Beijing's ambitions to make China the leader in the automobile of tomorrow. The development of CATL also involves the construction of a giant battery factory in Germany and could supply one-million-mile batteries to Giga Berlin when it produces Model Y next year.

Listed since last June on the Shenzhen Stock Exchange , CATL has acquired the means to finance an increase in its production capacities, which the group has planned to triple between 2018 and 2020. Nos it's a good news that CATL says it's new EV batteries are ready for production and we expect Tesla will be one of the first carmakers to use them.

CATL has a two-year contract with Tesla, which it signed early this year. The CATL batteries are set to go into Model 3 sedans produced at Tesla’s massive new factory near Shanghai, which started deliveries around the beginning of this year. Batteries are the costliest part of an EV, meaning suppliers of those components have a chance to reap a lion’s share of the industry’s profits.

This is Armen Hareyan from Torque News. Please, visit us at https://www.TorqueNews.com for daily car sector news and follow us on Twitter at https://twitter.com/torquenewsauto for daily automotive sector tweets. And if you would like to support our channel, I would really appreciate buying us animated applause once a month by clicking on the applaud button, which is next to the Like button, if you are watching this video on a desktop. 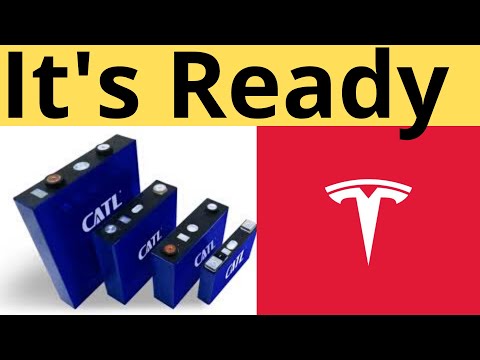 Just ahead of the Tesla Battery Day Tesla's Chinese battery partner CATL announced that its one-million-mile electric car battery is ready for product...