admin
Tesla leak shows Model 3 with 100 kWh battery pack, would have over a 400-mile range. This is the first publicly revealed 100kWh Model 3.

A Twitter user ‘Zeus M3’ on Twitter got access to Tesla’s factory mode and found a configuration of Model 3 with a 100 kWh battery pack. He shared a screenshot of a Model 3 on ‘Factory Mode.’

A 100 kWh in a Model 3 would undoubtedly result in over 400 miles of range – up from 322 miles in current Model 3 Long Range vehicles.

Consider these opinions about the 100KWh and 400-mile Tesla Model 3 from Electrek.

As soon as they sell through the current demand for Model Y, get ready for a reboot of pricing and options. The new base model will be 315mi range (or just shy) and the new LR will be 400mi. Both will be at or near the current price structure. Basically, the same money as a 250mi range Standard + will get you an RWD 315mi car.

Why bother? Well because the car sales are weak, and other cars are coming along in the 230-300mi range at competitive prices. Many of these other manufacturers have $7500 tax incentives (and dealers are price competitive too). So basically Tesla needs a big value add.

One continued truth with Tesla... It always pays to wait for the next version.

The other alternative would be to drop the price of the lowest range versions, but this probably makes more sense: keep the price the same, but increase the range. The competition might have similar pricing, but that kind of range is going to be hard to beat.

Now, you need to get that the next guy will always have something better. You can sit on the sidelines forever, but just like the upgrade cycle for phones has lengthened because the tech has gotten so good, the same will be true for EVs. Right now we're in the exponential growth portion of the tech, eventually, the pain of evolution won't be as significant from year to year.


Also, this is a greater benefit for the people who live in countries with a colder climate. Anything beyond 400 miles is a great value for colder markets.. Canada, Norway et all. The winters can significantly reduce range especially if you maintain the 20-80% charge.

Now, the 400-mile range Model 3 may not be needed for other climates, but it definitely makes road trips much nicer when you have little kids. When you have small children, you don't usually get to choose when you're going to need to stop. You have to time your stops based on when the kids want to eat, go to the bathroom, nurse, nap, etc. It's hard to always line those things up with supercharger stops. So it would be nice to have more range for increased flexibility with when to stop to charge. Most people are willing to pay more for the convenience of a longer range.

I think The Cybertruck is going to have an option for over 500 miles of range. It would be strange for the biggest EV that Tesla offers to have a longer range than the smaller ones. I think before the CT comes out officially the S, X, 3 & Y will all get an additional trim offered as "Long Range Plus" that will be both RWD, and AWD (and of course the trip-motor too for the S, maybe others). The S will probably have a 200 KW battery with 600 miles or so of range in order to remain the longest range Flagship vehicle of Tesla. The 3 and Y might have 100kw battery or maybe even 120kw. My guess is that the Trip-Motor CT battery pack size will be the same size as the longest range Model S pack come 2021.

This is Armen Hareyan from Torque News. Please, visit us at https://www.TorqueNews.com for daily car sector news and follow us on Twitter at https://twitter.com/torquenewsauto for daily automotive sector tweets. 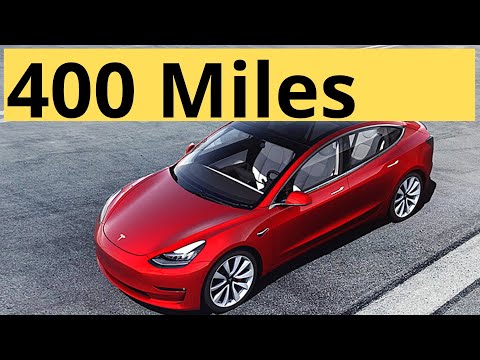 Tesla leak shows Model 3 with 100 kWh battery pack, would have over a 400-mile range. This is the first publicly revealed 100kWh Model 3. A Twitter us...