“There’s some construction work that needs to take place over the next couple of months,” Carl Walton, vice president of production engineering and facilities for Panasonic Energy of North America, confirmed to the Reno Gazette Journal.

“Then early next year, we’ll be installing new equipment with production starting shortly after that.”

Panasonic's battery expansion at Tesla's Giga Nevada will be coming from a 14th battery production line that Panasonic will be adding to Giga Nevada. Walton declined to give the exact number of GWh that the planned expansion will add to the facility’s capacity, though he noted that Panasonic expects the facility’s capacity to increase by about 10% with the upgrades in place. It should be noted that currently, Gigafactory Nevada has a capacity of about 35 GWh per year.

This is a new recharge of the Tesla Panasonic battery partnership as Panasonic also plans to hire more employees. Currently, Giga Nevada employs about 7,000 workers, with Panasonic and Tesla accounting for the bulk of workers, according to Walton.

“The expansion will increase our staffing by about 100 positions,” Walton said. “We’re excited to continue our investment in the Northern Nevada community and our people here.”

As noted by Reno Gazette Journal's Jason Hidalgo "a little over a year ago, the Nikkei Asian Review reported that Tesla and Panasonic were looking to freeze expansion plans for the massive battery factory due to potential risk. Panasonic Chief Executive Officer Kazuhiro Tsuga also expressed concern about Tesla CEO Elon Musk’s “unpredictable” behavior during an earnings briefing in October 2018, according to Reuters. Musk, meanwhile, called out Panasonic in a tweet last year, blaming its battery partner for Tesla’s reticence to further boost investment at the facility. The Tesla CEO claimed that Panasonic has not been able to ramp up capacity to adequate levels, which Musk says was constraining production of its Model 3 electric vehicle."

Now Tesla and Panasonic's relationships have improved and the increased demand in Tesla batteries have greatly contributed to this relationship making it a profitable one for both parties.

Let's wait and see what Tesla will announce about this battery capacity increase at the upcoming Battery Day on September 22nd.

This is Armen Hareyan from Torque News. Please, visit us at https://www.TorqueNews.com for daily car sector news and follow us on Twitter at https://twitter.com/torquenewsauto for daily automotive sector tweets. And if you would like to support our channel, I would really appreciate buying us animated applause once a month by clicking on the applaud button, which is next to the Like button, if you are watching this video on a desktop. You can go to https://www.TorqueNews.com/tesla for our daily Tesla news coverage. 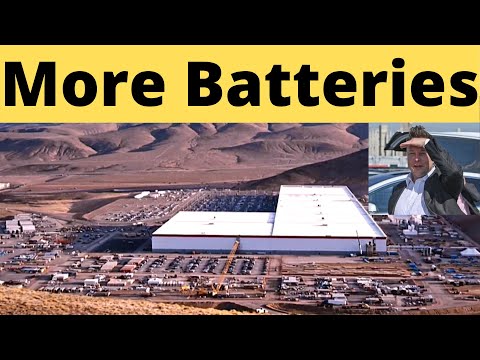 Tesla's battery partner Panasonic is adding the 14th production line at Gigafactory Nevada preparing a massive expansion ahead of the Battery Day even...