admin
While we have been amazed by the astonishing speed of Tesla Giga Berlin and Giga Shanghai, Tesla is spearheading another factory at Fremont for its battery production, code-named "Roadrunner Project" ahead of the upcoming Battery Day.

Our friends at Tesmanian are reporting that it's moving ahead with an amazing speed just outside of Tesla's Fremont factory.

Tesla set up a pilot battery cell line in Fremont, where they secretly designed and tested manufacturing equipment and processes. At the end of June, it became known that this line would be expanded to produce more battery cells. The company's secret project was named ROADRUNNER.

The company needed to increase the space inside the building by rebuilding and refurbishing its internal space. According to Tesla, these changes were necessary in order to accommodate new equipment to produce batteries for the ROADRUNNER project. The undertaking includes adding a third floor above the 47700 Kato Road building.

The building at 1055 Page will also be slightly modified. This building will be used to host additional production and R&D operations supporting ROADRUNNER, including a portion of cathode electrode manufacturing and the final processing step in battery cell manufacturing.

attery Day is quickly approaching and takes place on September 22nd. Tesla is expected to showcase its achievements in battery cell development and take a tour of the production line. As such, it is not surprising the company is actively working on the construction.

The drone footage shows construction is progressing at a rapid pace. The new building plan on Kato Road calls for the addition of space on the second floor (approximately 21,485 square feet), and to construct an additional, smaller (approximately 8,260 square-foot) third floor above.

This is Armen Hareyan from Torque News. Please, visit us at https://www.TorqueNews.com for daily car sector news and follow us on Twitter at https://twitter.com/torquenewsauto for daily automotive sector tweets. And if you would like to support our channel, I would really appreciate buying us animated applause once a month by clicking on the applaud button, which is next to the Like button, if you are watching this video on a desktop. You can go to https://www.TorqueNews.com/tesla for our daily Tesla news coverage. 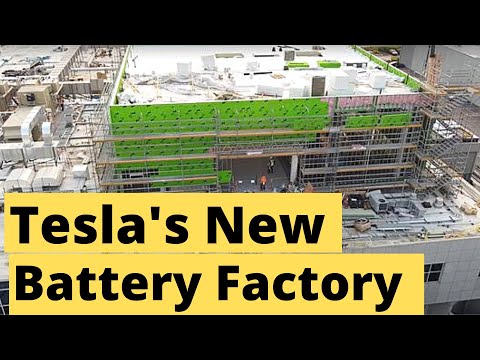 While we have been amazed by the astonishing speed of Tesla Giga Berlin and Giga Shanghai, Tesla is spearheading another factory at Fremont for its ba...